There are several variations of the standard production run; some of these would be a Sadler variation whereas others would have been made by design or accident by workers on the production line.

Several standard green and pink colourways have been noted with gold lustre either in the coachline or full lustre forms.

It is said that the gold lustre was used for tradesmen samples.  I find this hard to believe as the teapots I have seen have been less than perfect examples.  One would believe that they would select excellent blanks for the gold lustre process.  One green teapot I have has the gold lustre painted over (and into) a large first firing split in the driver’s head.  Whatever the reason for the gold variation they are very scarce.  Examples seen have the standard 5 hole strainer.

Beware when buying gold lustre teapots because the normal silver lustre can look gold when photographed under some fluorescent or sodium lights.

Examples can be found where the registration OKT42 is changed.  These are very scarce on original teapots.  (Later post 2000 copies are somtimes seen with 1937 registrations).  The best example is the early cold painted teapot that has a silver lustre registration OK1937. 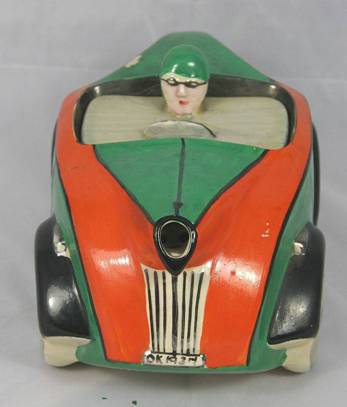 It has been said that these were a early form of souvenir pot as 1937 was the date of the Coronation of George VIth and Queen Elizabeth.
I have another 1937 personalised change probably by a production line worker with the registration E.V.T.62 on a yellow colourway.  What is more it has a lustre endorsement on the underside ‘BEST WISHES/ TO RUBY/XMAS 1937. 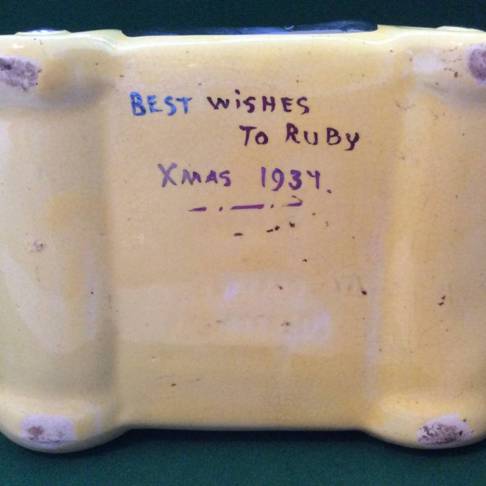 Equally unusual are the two yellow colourways in my collection with the registration TK293.  These came from different sources several years apart.  Paul Clark has also noted ADA1937, BRA44 and Brian Swann has sent me a photograph of AG333. There are also several variations of the OKT42 such as OKT24, OK24T, OK T42, or even with an extra stop OK. T42.

The later red teapot produced as a souvenir of the TEAPOT 2000 has in my example a registration of PAC058.  The PAC an abbreviation of Potteries Antique Centre. See later use of blanks.

The standard car has seven upright radiator bars at the front of the car.  There are variations of the number of bars between six and nine.  The example shown below has 9 bars on the pale sky-blue colourway.  The examples of non-standard number of radiator bars seem to be principally post-war colourways (with banner stamp).  Value shown is in addition to the normal colourway. 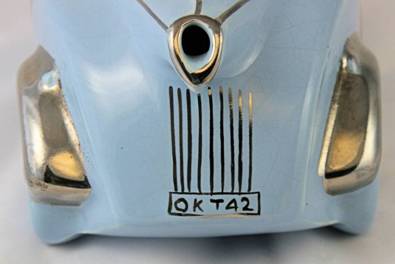 Colin Mawston, see references, illustrates a green teapot that has ‘A Present From Crediton’ in lustre on the flank of the teapot.   Paul Clark also has a photograph on file of a similar cream bodied Present from Crediton. 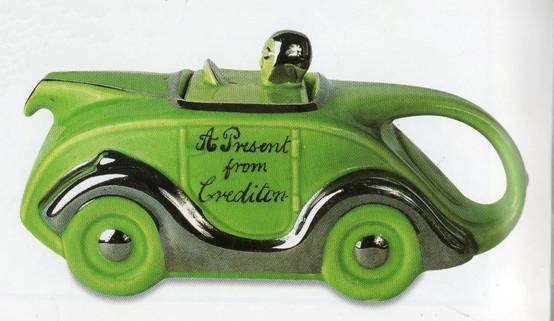 See Later use of OKT42 blanks for later examples of advertising teapots.

Thomas Brierley in his collection has a dark blue full lustre teapot that has a transfer sticker for Sherbrooke, Canada together with a maple leaf.  No doubt a local stockist trying to improve souvenir sales! 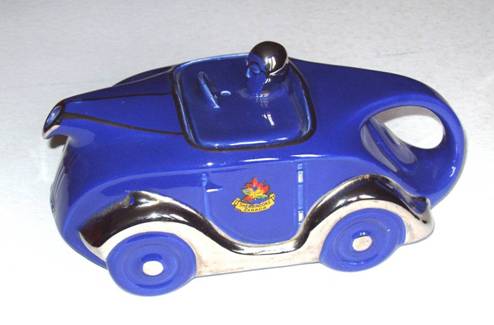 Also Tom has on record a black Canadian OKT42 that has a sticker on the underside that shows it was distributed by Mostly Music.  It is assumed that this was a local distribution as opposed to the main Sadler distributor in Canada. 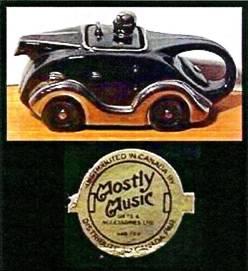